William Joseph Chaminade, His Apostolic Intent and His Engagement with Schools, Instruction, and Education: An Historical Portrait

Authors:
Joseph H. Lackner, SM
Recommended for school administrators and for those who seek to deepen their philosophy of Marianist education

If you are seeking material on the educational vision of Father Chaminade and an exploration of the historical realties that shaped his and the first brothers' approach to education, this treatise is for you.  It contains material on early Marianist methods of education, as well as the Founder's spiritual wisdom on instructing youth. Because of the nature of William Joseph Chaminade, His Apostolic Intent, this work is recommended mostly for school administrators and for those who seek to deepen their philosophy of Marianist education. (This work is an excerpt from Father Lackner’s dissertation on Marianist education.)

Partly because this mission was conceived in an inclusive manner, the composition of the Society of Mary differed from that of the Christian Brothers. It was not a community of lay religious schoolmasters. It was constituted by lettered and unlettered laymen of all social classes and by priests—all of whom enjoyed a relatively equal status and membership in the Society, engaged in a variety of works all focused by participation in Mary’s eternal role of doing for people in every age what she had done in the fullness of time: nurturing Christ. According to Chaminade, this role of Mary was Christian education conceived in a broad perspective. Furthermore, unlike the Christian Brothers, the Society of Mary was complemented by a female religious congregation and by lay organizations (Sodalities), and all parts were joined together by the common mission shared.

This difference between the Society of Mary and the Christian Brothers can be ascribed partially to the different ecological contexts from which they arose. Jean Baptiste de la Salle was laboring in the highly stratified, aristocratic society of late 17th century France, which generally neglected the education of poor children. This society’s working class or poor parents usually received little instruction and were occupied in gaining a livelihood for themselves and their families, so they could not give their children the needed instruction or a suitable Christian education.

Furthermore, the primary school teachers were generally very deficient in training and character. What the situation demanded, La Salle believed, was a body of competent, dedicated, and virtuous individuals who, both as a profession and religious vocation, embraced teaching in mainly poor primary schools. On the other hand, Chaminade—while recognizing the tremendous contribution these men continued to offer the Church and society in post-revolutionary France—was convinced the new world that had been ushered in also required a new organization born from the new times.

Part Three: Engagement with Schools
Foundation of the Society of Mary and the Apostolate of Schools
The Condition of Schools in Post-Revolutionary France
Normal Schools, a Work Especially Inspired by God 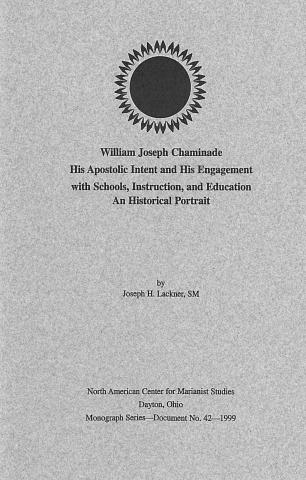