Origins of the Marianist Family: Notes on Marianist History

Authors:
Eduardo Benlloch, SM
It reads like a Hollywood thriller--and in fact it includes a DVD, called Where We Were Born--yet it is the essence of our Marianist history, the true story of our origins, filled with moments of joy, betrayal, and uncertainty.

It reads like a Hollywood thriller--and in fact it includes a DVD, called Where We Were Born--yet it is the essence of our Marianist history, the true story of our origins, filled with moments of joy, betrayal, and uncertainty. And, it clearly depicts the greatness of our Founder, Blessed William Joseph Chaminade. What is it?

It is Origins of the Marianist Family: Notes on Marianist History, a new 364-page publication from the North American Center for Marianist Studies (NACMS). This is the type of story that can only be told well after the fact, long after those involved have received their eternal rest.

Here are the main characters in the real-life drama, which comprises the last third of the book, of how Father Chaminade lost control of his precious Society of Mary:

Origins of the Marianist Family chronicles the interconnection among these men and its implications for our Blessed Founder. While parts of this new work are devoted to the Society of Mary, Origins also explores the beginning of the comprehensive Marianist Family and the development of the Marianist Sisters through the life and works of Adèle de Batz de Trenquelléon and the numerous contributions of Marie Thérèse de Lamourous to the laity and beyond.

According to Father Benlloch:

The origin of this book is very simple. For twelve years I have tried to explain Marianist history to our novices. What began as some notes on Marianist history (in manuscript form) has now become a book. There is no doubt about the didactic character of this publication.

Marianist history is not simply a collection of facts or anecdotes. It has to do with the evolution of people, above all Blessed Chaminade and Venerable Adèle de Trenquelléon, their spiritual journeys, and all of the activity that God realized through them. This has to be pondered.

Could this book be considered an interwoven biography of Blessed Chaminade and Venerable Adèle? Frankly, yes . . . a kind of skeleton biography, without literary adornment or fictionalized accounts, but with historic exactness and an attempt to draw closer, even in a somewhat summarized way, to the depth and richness of their interior life. . . .

To have life, we must be rooted. To be grafted into a tradition does not mean we keep looking to the past; on the contrary, I want to help all to be well-rooted so they can look to the future with hope.[1]

Origins of the Marianist Family sells for $19.50, plus postage, and includes the DVD Where We Were Born. See below for a description.

Where We Were Born

Have you ever wondered what the houses where Father Chaminade lived or Adèle was born looked like . . . or where Marie Thérèse de Lamourous worked? How did they think about their environment?

With the English version of Where We Were Born, you can get a better idea of just these matters and more, with the sights and sounds of our heritage.

This work was originally produced in 1997 by the Society of Mary's Provinces of Madrid and Zaragoza and the Marianist Sisters Province of Spain to commemorate the bicentennial of the arrival of Father Chaminade and Adèle in Zaragoza and San Sebastián. It was originally created as a slide program, and the International Center for Marianist Formation has produced the program in a DVD format.

The ICMF, with permission of the original producers, has updated some of the photos and adapted the program to new formats. NACMS, in conjunction with the ICMF, is including a copy of Where We Were Born with each Origins book sold to more fully "help all to be well-rooted so they can look to the future with hope."[2]

17.3. Internal Crisis of the Society of Mary

It must be recalled that Bishop d’Aviau, who always had shown
himself very favorable to the Marianists, died on July 12, 1826, at the
age of 91.

The financial situation of the Society of Mary was very bad.
It was too much in debt. Many unjustified expenses were made in the
works. Because of Father Lalanne’s activity Saint Remy had a deficit
and was giving nothing. There were moments of anxiety when it
seemed there was no solution. In spite of Father Chaminade’s
insistence about the situation there were directors who kept spending.
The Clouzet-Lalanne confrontation in Saint Remy became
intolerable. Lalanne wanted the large establishments to be
autonomous and to change the very centralized government of the
Society of Mary. In addition, with the external threat of being
terminated, some men became discouraged or lax. If it had been a
religious order with the sodalities as apostolates in its Civil Statutes,
it would have been suppressed by the government.

There were crises of all kinds in the communities. Some
became proud of their professional success and neglected the
religious aspect. There was an unspoken but deep indifference
because there were no Constitutions, and Chaminade was already
getting old. (He was 69 in 1830.) Some complained that Marianist
life had little quality to it, that there was not enough penance, etc.
Added to this were the defections, some of them very painful.
Auguste Perrière became very discouraged because he thought the
original purpose—secondary education into which he had put
everything—had been lost. The boarding school and Institution
Sainte Marie had been making money, and it was all gone . . . being
given to elementary education. He knew the financial situation and
that he was contributing in vain. At a loss, he went to consult the new
archbishop, Cheverus, who encouraged him to leave, put no obstacles
in his way, and practically dispensed him from his vows.

Father Collineau had become enamored with preaching and
was against teaching and the restrictions imposed by religious life.
He had been dedicating himself to the external apostolate and hardly
lived in community. Archbishop Cheverus also encouraged him to
leave and made him an honorary canon of the cathedral. Even more,
the archbishop was convinced the Society of Mary was not going to
last and would dissolve. For this reason he hesitated to ordain the
future Father Fontaine.

By Way of Introduction
Chapters
1. Infancy of William Joseph Chaminade
2. Mussidan
3. The Revolution
4. Exile of Blessed Chaminade
5. Infancy of Adèle de Batz de Trenquelléon
6. Exile of Adèle. Her First Communion
7. Mlle de Lamourous and the Miséricorde
8. Blessed Chaminade’s Marian Sodality of Lay People
9. Little Association of Adèle
10. A Providential Meeting: The Little Association
Joins the Sodality
11. Toward the Foundation of the Religious Orders
12. Founding of the Daughters of Mary
13. Founding of the Society of Mary
Preview: An Outline of the First Ten Years of
Expansion of the Two Orders
14. Expansion of the Daughters of Mary Until the
Death of Adèle
15. First Works of the Society of Mary
16. Significant History of Saint Remy
17. Revolution of 1830 and Its Consequences
18. History of the Constitutions and the Decree of Praise
19. Calvary of the Founder: Last Years of Blessed Chaminade

20. Glory of the Founder: His Beatification

Family Trees of the Founders
Index

Origins of the Marianist Family
Intermediate 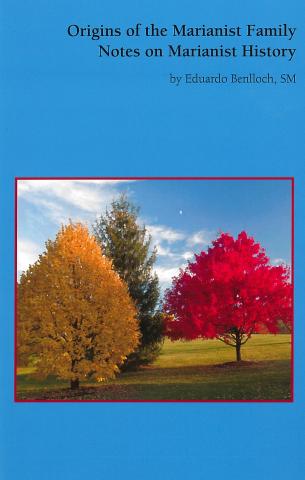