Authors:
Joseph Stefanelli, SM
Adèle de Batz de Trenquelléon was a woman of great zeal. She empowered many women to grow in faith, community, and service.

Born in 1789, the same year the French Revolution began, Adèle de Batz de Trenquelléon was a woman of great zeal. She empowered many women to grow in faith, community, and service to others while deepening their relationship with God. This biography by Father Joseph Stefanelli, SM, allows the reader to truly know Adèle by walking through her childhood experiences, her spiritual journey, her visioning of the Daughters of Mary Immaculate, and her faith-filled years. Father Stefanelli uses her abundant letters to support the successes and challenges of her life's ministry. Her collaboration with Blessed William Joseph Chaminade and Marie Thérèse de Lamourous was fundamental for the Marianist Family. Father Stefanelli includes significant details of their shared mission. This biography offers an in-depth look at Adèle's spirituality, personality, and the numerous ways she responded to God's call.

Life at the château soon settles into a peaceful routine. Unlike her parents, who in their younger years had experienced the life of Paris and of the royal court, the elaborate balls and the social events of the aristocracy, the diversity of the great Capital, and all the advantages that money and power and influential friends can obtain, Adèle will live her life in relative obscurity on a country estate, and with limited resources that pose not only inconveniences for her but much more importantly pose limitations on her efforts to help others. Her days are divided between her exercises of personal spiritual development and her outpouring of love and concern for the less fortunate. She takes part in the daily routines of the château, enjoys immensely the companionship of her mother, of her father, of Charles and their little sister.

Under the guidance, first of Catherine-Anne, then of Monsieur Ducourneau, her schooling continues. She is able to solidify and synthesize what she has learned at various intervals and in summary fashion from her mother while they were in exile. Her education is basic: reading, writing, arithmetic. It apparently does not give large place to the fine arts normally associated in the ancien régime with the education of young aristocratic women. She learns neither music nor painting, but does learn sewing, embroidering, housekeeping and management of the estate. Later, when her father and mother will both be absent from Trenquelléon, it is Adèle who supervises and directs the household and the care of the far-flung lands. Supremely important to her is her continuing education in matters of the spirit, in prayer, and in the exercises of her religious faith. The atmosphere of the château is most conducive to this development. Some neighbors, and even some friends, seem to speak of it rather despairingly as a "monastic environment." For Adèle, it is a period of preparation for the day when she will enter Carmel. She is still convinced that she is called to be a Carmelite nun: in France, if religious orders are eventually restored; otherwise, in Spain in San Sebastián. With this thought in mind and after consultation with her mother, she asks Monsieur Ducourneau to draw up a rule of life. This early in 1802, when she is not yet thirteen years old.

Chapter 1: June, 1808
Adèle; the chateau of Trenquelléon; Feugarolles, Agen, and the Garonne valley; family and friends.

Chapter 2: 1789-1793
Adèle’s birth; ancestry; her parents; the Estates-General; beginnings of the Revolution; life on the estate; Constitution of the Clergy; the émigrés; departure of the Baron; dispersal of religious; execution of Louis XVI.

Chapter 3: 1793-1797
The Revolution and Trenquelléon; search and confiscation; radical changes in France; reactions and riots; Reign of Terror; Adèle and the poor; her “Carmelite vocation”; relative calm in France; the coup of September 4, 1797; the Baroness trapped.

Chapter 4: 1797-1801
The road to exile; Tolosa; petitions to the government; on to Brangança; life in exile; the family re-united; Adèle’s education and development; San Sebastián and first Communion; home again.

Chapter 5: 1801-1803
New start at Trenquelléon; Concordat; Napoleon and Pope; amnesty and rebuilding; Ducourneau; a Rule of Life for Adele; Confirmation; the Diché girls.

Chapter 6: 1803-1805
Adèle and Dicherette; Dousset; Emperor Napoleon, needs of the Church in France; the “Association” and its Rule; marriage of Dicherette; Adele’s correspondence; discerning a vocation; Bishop Jacoupy at Trenquelléon; Elisa and Clara orphaned.

Chapter 8: 1807-1809
Lafon and the Sodality of Bordeaux; Chaminade; relations with Bordeaux; marriage proposal for Adèle; her decision; re-structuring the Association into the Third Division; Chaminade and Adèle; spiritual practices; suppression of the Sodality in Bordeaux; Adèle seriously ill.

Chapter 9: 1809-1811
Health and vocation; political unrest; Adèle’s twenty-first birthday; her “school” and charities; her concern for the Associates; fashions and decency; Adèle’s life-style; her understanding of Mary; death of Sérène; birth of Dicherette’s fourth son, further contacts with Bordeaux.

Chapter 13: 1816
Firmness, and abandonment; Constitutions, “regulations,” and candidates; death of Madame Pachan, leasing the Refuge; financial arrangements between Adèle and Charles; farewells; arrival at the Refuge, May 25,1816; the city of Agen; religious life, vows, enclosure; Chaminade and Jacoupy at odds.

Chapter 24: 1827-1828
Adèle’s Testament, financial arrangements; processing the request for government recognition; departure of Soeur Marthe; final illness of Adèle, death and burial; the Baroness writes to Chaminade; official recognition of the Institute by the State and Church; Adèle, still very much alive. 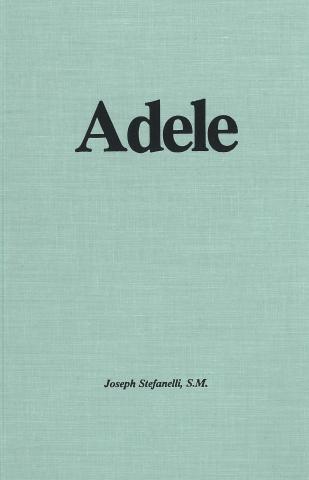