Authors:
John G. Graves, SM
A touching account of the joys and struggles of founding the Society of Mary in the United States, including the establishment of the University of Dayton and Saint Mary's University

This is a wonderful work for all lovers of American Marianist history.

Father Leo Meyer’s 13 Years at Nazareth captures the essence of the Society of Mary’s arrival in America and the joys and struggles of establishing a foothold in the “New World.” Emphasis is placed on the origins of Marianist life and ministries in Ohio and Texas, including the University of Dayton and Saint Mary’s University.

In response to several requests, the North American Center for Marianist Studies has published this new edition of Father Leo Meyer's 13 Years at Nazareth, written by Father John Graves, SM. The motives for these requests are obvious. Anyone who picks up the original edition quickly realized how cumbersome it is to refer back and forth between Graves' text and the pages he referenced in The Centenary of the Society of Mary, written by Brother John Garvin, SM. This inconvenience has been eliminated in the present edition by printing those sections from The Centenary in blue ink within the course of Graves' narrative.

All the bickering and dissatisfaction among the brothers, however, was reduced to whispers in the face of a great calamity, which visited and almost overwhelmed Nazareth at the very end of the year 1855. On the night of December 26 and 27, 1855, fire destroyed the Stuart mansion and the newly completed annex, and the morning of St. John's Day saw the brothers without home or shelter.

Brother Brueck, an eyewitness, says that December 26 was a memorable day in his life.
. . . It was near eleven o’clock when I noticed . . . what I thought to be moonlight. This light increased more and more, so at last I got up and opened the door, which led into a little hall and the opposite door led into a passage between the house and the carpenter shop. This passage was about four feet wide and covered with a shingled roof.

When I opened the door of my sleeping room, I saw the fire through the cracks of the door. At the same time I heard Brother Anthony Heitz giving the alarm in the room above me, and he came down, yelling out: “Firpo! Firpo!” (Fire! Fire!) I called Brother Joseph Radinger and then left the room to get water. Without any trouble I passed between the house and the shop, because the fire was at that moment not far spread. As Joseph Blasiard had the key for the kitchen, I broke a window and through it came into the kitchen, but there was no water. About this time I heard Reverend Casper Wiese call for an ax to chop down the roof covering the passage between the house and the carpenter shop, but no ax was to be found. I then saved the bedding and clothes in my room and came into the recreation room, where I found Father [Nicholas] Nickles, then a postulant, who by order of Brother Litz put the little bottles of his so-called drugstore into a basket. At the same time Brother Heitz, who said, “You better leave this and save what has any worth to us.” I went then into the room next to the chapel, took up the vestments, when the same brother rebuked me for this as the fire would not come so far. Here I saw Father Meyer, who looked through a window at the fire. I heard him say when someone made the remark that the whole house would be lost, “Deo gratias; thanks be to God.” He then went into his room, took the monstrance, wrapped it up in a blanket, and hid it in the garden. Then he took his papers, the chalice, etc., etc. . . .

The daily newspaper of Dayton adds a few details about the fire fighters on this cold night.

The bells were rung and part of the Neptunes [volunteer firefighters unit name] assembled at their engine house and took out their engine. . . . No more of the company came; they put up again and went home. The Oregons started with their engine, but after going a short distance, deterred probably by the severity of the weather and the distance, turned back. Just as they reached their engine house, however, they were overtaken by a messenger from the college who offered on behalf of Mr. Meyer $100 for their assistance. . . . This liberal offer prompted a dozen or fourteen to go with their engine to the scene of the fire. . . . The stories . . . that either of the engine companies declined going to the fire because the college was a Catholic institution, or that upon their arrival the Oregons refused to work because of the noncooperation of the brethren and students are . . . false.

1. Father Leo Meyer the Trailblazer
2. Rejected Petitions for American Brothers
3. The Definite Call to America
4. The First Reinforcements
5. The Purchase of Nazareth
6. Beginning the University of Dayton
7. Strained Relations Among Father Meyer, the Pastor, and the Bishop
8. Growing Pains–The Problem of the Debt
9. Jurisdictional Bars Around Nazareth
10. The Texas Adventure
11. Developments in Dayton and Cincinnati
12. The Ohio Missions Beckon the Society of Mary Saint Remy
13. Expanding Nazareth
14. Two New Establishments–1854
15. Recruits for Texas
16. Depression and the Debt
17. St. Remy Fiasco and the Mission Picture
18. Dissension in the Ranks
19. The Fire
20. In the Backwoods of Wisconsin
21. The Debt and Rebuilding
22. Prospects in Cleveland and Cincinnati
23. The Question of the Missions Once More
24. Cleveland, Sandusky, Pittsburgh, Rochester: New Foundations
25. The Final Payment of the Debt
26. Continued Episcopal Displeasure: The Normal School Issue
27. The Training of Candidates
28. Father John Courtès, Visitor and New Superior
29. Character of Father Leo Meyer 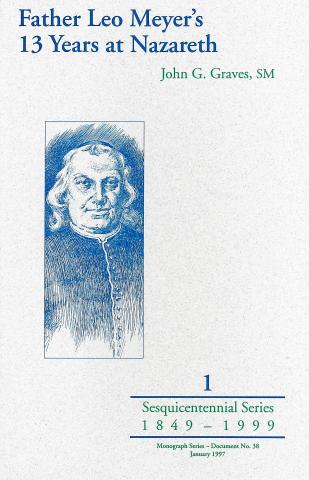