Authors:
Joseph Simler, SM
This text, the first biography of Father Chaminade, remains the most comprehensive account of his remarkable life.

This text, the first biography of Father Chaminade, remains the most comprehensive account of his remarkable life, following him from his earliest days at the seminary in Mussidan, through the dangers of the French Revolution, the years of patient exile in Saragossa, the early years of re-Christianizing France, the foundation and growing pains of two religious orders, and the trials of the final years of his life, to his death. It was written by Father Joseph Simler, fourth Superior General of the Society of Mary, whose soul was deeply penetrated by the authentic spirit of the Founder. Often called the “Second Founder,” Father Simler was endowed with a unique understanding of Father Chaminade’s vision and charism. As Father Simler himself wrote in the Foreword: “We have chosen as our guiding principle to present the facts such as they are, and not to yield to any subliminal wishful thinking, to treat these facts with simplicity and frankness, and not to be guided by some preconceived notion. Our primary concern is for the truth.”

It is essentially through the heart that men are won over; it was for this reason that Father Chaminade attracted many people. His concern for people was not a superficial feeling easily aroused and just as quickly stilled, but rather that of true affection conveyed by dedication and sacrifice. His love for young people and for his religious kept him constantly attentive to their spiritual and temporal interests. He lavished on them his truly paternal concern, looking after their health and worrying over their indisposition. He wrote to one of them who had neglected to mention a temporary illness, “I beg you in the future not to spare me so much. I cannot have peace if I fear you are keeping silent about things affecting your health.”

The conclusions of his letters are full of the most heartfelt tokens of affection. “I stretch out my arms toward you,” he wrote, as if to embrace you and press you tenderly to my paternal heart.” Or again, “This letter will be more fortunate than I, for it will fall into your hands while I am separated from you by about fifty miles. I embrace you in spirit, since I cannot do so in person.” He was most attentive to all who came to him, cultivating “the goodness and kindliness” called by St. Francis de Sales the “delicate flowers of goodness, virtues that shun display but are truly excellent.

Chapter 1
Boyhood (1761-1771)
Périgueux; the Chaminade family; Blaise Chaminade; Périgord; attachment of the Chaminade family to their religion; the children; the religious vocation of Jean Baptiste and Blaise; William, the fourteenth child; William’s early education and the influence of his mother; first schooling at Périgueux; at Confirmation William takes the name of Joseph, henceforth his preferred Christian name.

Chapter 3
The First Ventures (1785-1792)
Joseph Chaminade, treasurer of the collège; rule of the community of St. Charles; reputation of the Chaminade brothers; the seer, Suzette Labrousse; Joseph, deputy to the assembly of ecclesiastic electors of Périgord clergy; good example of the Congregation of St. Charles; Louis and Joseph at Mussidan; Joseph in Bordeaux; relations with Fr. Langoiran: the property of Saint Laurent and residence there with father and mother; massacre of Fr. Langoiran; new oath stressing equality; Blaise Chaminade in exile, his mortified life, his death; Louis Chaminade exiled to Spain.

Chapter 4
Sacred Ministry during the Reign of Terror (1793-1794)
Bordeaux: relative calm at the beginning of the Terror; guillotine set up permanently; measures of Saint Laurent against persecutors; name of Fr. Chaminade on list of emigrants; exercise of sacred ministry in the town; stratagems and anecdotes; Fr. Chaminade and lists of emigrants; encouragements to priests concerning oath required by the Convention.

Chapter 7
The Exile (1797-1800)
Chaminade leaves for Spain, meets his brother Louis at Bayonne; de la Tour du Pin, Archbishop of Auch; from Bayonne to Saragossa; Feast of Our Lady of the Pillar; city of Saragossa; Archbishop of Auch and emigrant priests; threats of expulsion by Spanish government; Chaminade brothers’ trust in God.

Chapter 8
Occupations of the Priests in Exile (1797-1800)
Emigrant priests in Spain; Joseph’s attention to prayer and study; visits to monasteries; Trappists of Sainte Susanne; Fr. Bouet joins Trappists at Sainte Susanne; Our Lady of the Pillar; spiritual progress of Father Chaminade; at Mary’s feet; end of exile.

Chapter 9
Administration of the Diocese of Bazas (1800-1802)
Fr. Chaminade’s name struck from list of emigrants; return to Bordeaux, condition of Bordeaux; first projects, a conversion; named administrator of the Bazas diocese; administration; See of Bazas is suppressed; Chaminade is named Missionary Apostolic.

Chapter 16
The Restoration of the Sodality (1814-1830)
Duke of Angoulême in Bordeaux; Sodality reconstituted; the One Hundred Days; Fr. Chaminade, royalist; the Sodality’s success; its transformation; parish Sodalities; Madeleine recognized as auxiliary chapel; affiliation to the Prima Primaria; twenty-fifth anniversary.

Chapter 21
Growth of the Daughters of Mary (1816-1820)
Problem of perpetual vows and cloister; revision of Constitutions; first apostolic works at Agen; taking the veil, Christmas 1816; Daughters of Mary and the Orphelines de Saint-Joseph; profession; trials of the community; transfer from Convent of the Refuge to that of the Augustinians; attempted merger with the Holy Family of Villefranche; foundation of Tonneins; secular Third Order. 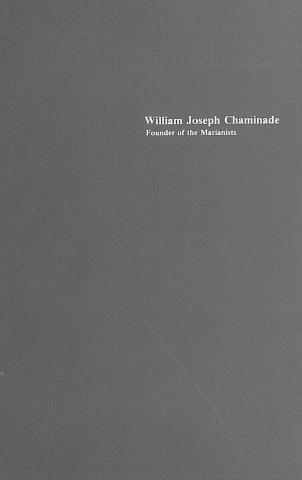