Chapel of the Madeleine

Authors:
Jean-Baptiste Armbruster, SM
Translator:
Thomas A. Stanley, SM
This 63-page booklet tells the story of where the Marianist movement was born and provides historical context to this sacred space.

Many Marianists know where we were born as a movement, Bordeaux, France, and specifically the Madeleine, the chapel where Chaminade ministered and saw his vision of Church come to life. But how many of us know the story of this building, the rich history it holds for the Marianists and for those who came prior.

Now, The Chapel of the Madeleine tells this story and provides historical context to this sacred space. This book, which was translated from the French by Thomas A. Stanley, SM, was published in English in honor of the bicentennial of Blessed William Joseph Chaminade’s appointment as minister of the oratory to be established at the Chapel of the Madeleine.

A plague in Bordeaux and the execution during the French Revolution of two Madelonnette Sisters are just two small facts that pepper the history of the time prior to Chaminade. However, the largest portion of the book is devoted to how the chapel has evolved since the arrival of the Marianists.

Ask a Bordeaux taxi driver to take you "to the Madeleine" and you will probably be taken to the Hôtel Madeleine at no. 32, Cours Pasteur. A man in the street would probably direct you to the Chapel of the Madeleine, which is close by at nos. 24-26, Cours Pasteur. These two buildings are the only remaining evidence of what was once Bordeaux's Madeleine District, which stretched from Rue des Ayres to Rue du Mirail.

On these streets we can find the reason for the name of this district. One the first street is the Bouglon Hospital, and on the second is a chapel once dedicated to Saint Mary Magdalene.

The chapel initially dedicated to Saint Mary Magdalene the Penitent by the people of Bordeaux was a funeral chapel belonging to the Saint Jacques Hospital and located near the corner of Cours Victor Hugo and Rue du Mirail. It was within the boundaries of Saint-Eloi parish.

Built at the beginning of the 12th century, it remained in existence until 1548, when some individuals took refuge there during the civil uprising against "heretics" to save themselves from the fury of the crowd; they perished in the flames of a fire deliberately set to the chapel.

Later a chapel was dedicated to Saint Mary Magdalene in the church of Saint-Jacques. The church of Sainte-Colombe, now destroyed, also had a chapel of honor of the holy penitent, who was greatly honored in this district of Bordeaux.

The Chapel of the Madeleine, Father Chaminade, and The Marianists from the French Revolution to 1950

The Chapel of the Madeleine Enters Its Fourth Century

1. The Presence of Saint Mary Magdalene
2. Renovation of the Chapel
3. Religious Works Disappear, but the Mission Continues
4. Testimonies and Hopes . . .
5. Chapel of the Madeleine―A Sanctuary? 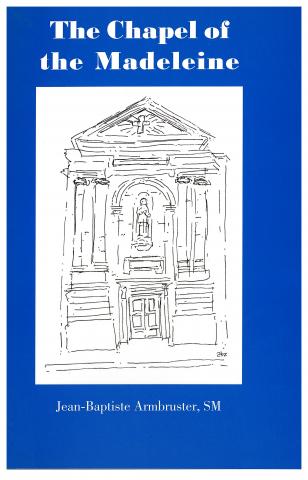