Authors:
Emilio Ortega, SM
Translator:
Thomas A. Thompson, SM
The book is a compilation of individual biographies of Brothers Carlos, Eraña, Jesús Hita, and Fidel Fuidio who were martyred in 1937 during the Spanish Civil War.

Father Thomas Thompson’s translation of this work by Father Emilio Ortego, SM, is a compilation of individual biographies of three Spanish martyrs—Brothers Carlos Eraña, Jesús Hita, and Fidel Fuidio, who were martyred in 1937 during the Spanish Civil War. Father Ortega traces the lives of these brothers and highlights their humble beginnings growing up in working-class families; their deep faith lives; and their apostolic involvement in Marianist schools. Key to their stories is their humanity and how God called them to become disciples of Christ and instruments of religious education. As Brother Fidel said, “The happiest moment of my life is when I open the door to my classroom, sent on mission to the students.”

Don Carlos Eraña was a man of peace and conciliation. As superior, he was always attentive to the spiritual and temporal welfare of the brothers. “He is undoubtedly the religious of the province who best understands the soul of a small child of primary years and is best prepared to direct his teaching,” says the report of a superior. The first Relator of his cause for beatification, a Carmelite, admired Don Carlos. “This man,” he said, “has no defects. He could be canonized in the ordinary way.”

Don Jesús Hita was a good teacher. An introspective individual, he may have felt that his life lacked completion. Yet, when someone suggested the possibility of weakening in the last moment, he insisted, “God gives the grace to resist.” With Blessed Juan Pedro de San Antonio, CP, a companion in those final days as he prepared for martyrdom, he died shouting, “Long live Christ the King!”

Don Fidel Fuidio was the wise man with the childlike heart. As an archeologist, he discovered prehistoric and Roman settlements in Spain and published scientific studies. As a teacher, he communicated the enthusiasm he felt for the subject. His biography was appropriately titled Sympathy in Education. He is a model for the hope and enthusiasm which should characterize educators of youth.

Foreword
Logo of the Three Martyrs

Chapter  1: “Those Dangerous Characters”
Chapter  2: In Escoriaza
Chapter  3: The Great Desire of His Life
Chapter  4: The Novitiate at Vitoria
Chapter  5: Fidelity and Gratitude
Chapter  6: Suances and Something More He Desired
Chapter  7: The Versatile Educator
Chapter  8: The Approach of Bad Times
Chapter  9: You Have No Lasting Dwelling Place
Chapter 10: The Circle Grows Smaller
Chapter 11: “If Martyrdom Is Our Fate, So Be It!”

Chapter  1: A Child Is Born
Chapter  2: An Important Decision
Chapter  3: A Long Journey
Chapter  4: Hard Times for Fidel
Chapter  5: “I promise to God and I vow. . . “
Chapter  6: Scholasticate in Escoriaza 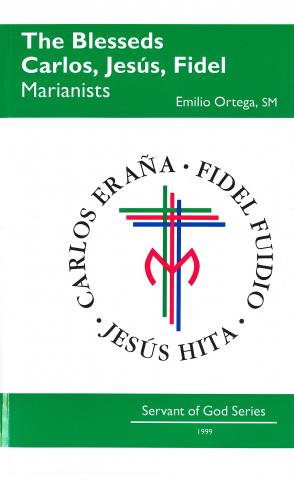