Authors:
Josef Levit, SM
Translator:
Richard Hartz, AM
The story of Jakob Gapp is a compelling real-life drama of a flawed man's discovery of the Gospel and the journey where it led him, to martydom at the hands of the Nazis.

The story of Jakob Gapp is a compelling real-life drama of a flawed man's discovery of the Gospel and the journey where it led him. His prophetic opposition to Nazi Socialism, which led to his martyrdom, serves as a clarion call for us to evaluate our own time and to oppose oppression. While we today might not take such radical steps, Blessed Gapp's life is a witness that we must follow the Gospel and not the trendy politics of the day.

In The Society of Mary
As Prefect, Religion Teacher, and Minister to Youth

Even more important than this historical and general psychological background is a consideration of the statements that refer to the alleged atheism and socialism with which Father Gapp is said to have returned home after the war.

At a Crossroads in the Life of Jacob Gapp

It is necessary to look rather carefully at the statement of the witness Marianne Oberauer, the daughter of Jakob Gapp’s sister Maria. She was born in 1921, when her uncle was already a novice in the Society of Mary. “Originally Jakob was not very pious, because the injustices of this world and the unjust division of goods appeared rather to have turned him from God. I know for sure that Jakob actually returned from Italy and from the war as an atheist. He came back from the war as a socialist.” . . .

And what about the second assertion that Jakob Gapp was a socialist? Brother Josef Wagner, SM, the Marianist who had picked up the candidate for the Society of Mary at the railroad station in Freistadt, told the author that on his arrival at the station Jakob said to him, “Here I am. I am a socialist, and I would like to become a priest. If that is not possible, please tell me so right away, and I will go home.” In his review of the first trimester in the novitiate on January 1, 1921, Father Hippolyt Hamm, SM, the novice master, wrote the following of his novice Jakob Gapp: “He came with poorly digested socialistic ideas that he had brought back from the battlefield.” . . .

In his first request for perpetual vows in 1924 he himself wrote, “My reasons for entering were by no means free of selfishness and worldly motives.” Among his relatives only Marianne Oberhauer, his niece, reported about the circumstances of his entry into the order: “Jakob definitely wanted to study, but there was no money for him to do so. He happened to get a brochure in which the Society of Mary offered young men educational opportunities. Jakob claimed this possibility for himself.”

On the grounds of these statements one can conclude that Gapp surreptitiously obtained admission to the Society of Mary. In later years, he himself seems to have perceived it in just this way. The paths God choose to lead a man to the place where God wants him are in many cases beyond human knowledge and judgment.

Chapter Two
In the Society of Mary

Chapter Three
In Conflict with the National Socialist Regime

Appendix Two
Decree: Beatification of the Servant of God 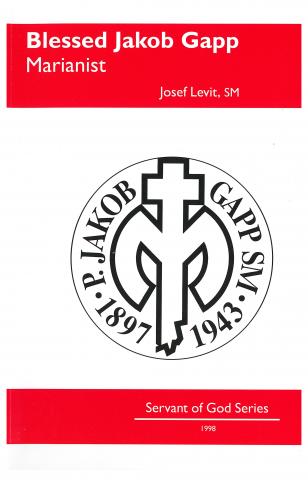