Our Lady of the Pillar: Patroness 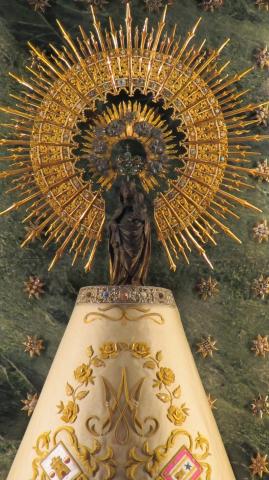 OUR LADY OF THE PILLAR
A PATRONESS OF ALL HISPANIC PEOPLES

What do you know about Our Lady of the Pillar? Have you heard of her? Except for Hispanic peoples, especially Spaniards, and lovers of Hispanidad, she is most likely not as widely known as the Blessed Virgin Mary of other famous shrines. Yet her story predates the Gospels and was told long before the Gospels were written. This is an interesting story, seemingly unbelievable, about Mary’s first apparition in history.

Origin
The tradition tells us that seven years after the death of Jesus, on January 2, 40 AD, the Apostle St. James the Elder, brother of St. John, sat tired and disappointed by the bank of the Ebro River in what is now Zaragoza, Spain. The people of the Roman province of Hispania (Spain/Iberian Peninsula) were not open and receptive to the Good News of Jesus, and St. James was ready to give up his efforts to evangelize them. On that January day the Blessed Virgin Mary, still living in Palestine, appeared to James atop a column or pillar of stone. With encouraging words, she assured him the people of Hispania would become Christians and their faith would be as strong and durable as the pillar on which she stood. To remember the visit and promise of the Virgin Mary, the first Marian shrine was built around the pillar, and James began to convert the pagans of early Spain.

Skepticism
Many will automatically think this is just another pious myth among many Catholic legends and an interesting story for tourist guidebooks, or another excuse for celebrating a weeklong fiesta around the time of the Feast of Our Lady of the Pillar, which is celebrated on October 12. Some will suspect this is simply another occasion for selling glitzy, chintzy Marian souvenirs. Why would an enlightened person of this modern era believe such a story? Yet, neither natural nor religious reasoning has been able to discredit and discard the story of Mary of the Pillar and relegate her to unbelief and something unworthy of genuine devotion.

On the positive side, it is interesting to note that the German Augustinian stigmatist and visionary of the early nineteenth century, Blessed Anne Catherine Emmerich, comments on Mary of the Pillar’s appearance to James. With rich detail she describes the Zaragoza event in chapter 14 of The Life of Our Lord and Savior Jesus Christ.

Some, even with scientific reasoning, might dismiss any claims of sincere devotion of Marian devotees. The story of Our Lady of the Pillar does seem unbelievable, unless you grew up with it or have an unshakable faith. Anyone who was raised in Zaragoza or somewhere else in Spain, anyone who has grown up knowing Our Lady of the Pillar, is intimately linked to her as any Mexican person is to Our Lady of Guadalupe, or any Irish Catholic is to Our Lady of Knock. The same is true of Lourdes and the French, or Fatima and the Portuguese, or Czestochowa and the Polish.

The Reality
For devotees of these and other Marian apparitions, Mary is not only the Mother of Jesus and of the Church but also their mother—and our mother. Some might even be lapsed Catholics, but they will at least once a year on her feast day visit her church or pray to her.

Our Lady of the Pillar has a special place in the lives of many, not the least of which are those who bear her name. In Spain and in Latin America the name “Pilar” is commonly given to girls at Baptism. At one time in Spain almost everyone wore a medal of Nuestra Senora del Pilar. Our Lady of the Pillar is also immensely important in the history and mission of several religious congregations and movements, especially the Marianist Family, founded by Blessed William Joseph Chaminade. Her special relation with Hispanic America results from Columbus’ discovery of America on October 12.

Devotion to Mary is something that cannot be dismissed simply with psychological and sociological explanations. This devotion goes beyond collective pride, national identity, and the need to belong. It is something more mysterious, something that transcends time, cultures, and even reason itself.

We learn to live with the seeming contradiction between reason and faith, between believing Mary is our mother and thinking all this is unbelievable. After all, faith is about love, mystery, and life. And those are real, even if we cannot understand them. Just because we do not fully comprehend all this and cannot fully explain it, does not mean it does not exist.

Let the thought and the image of Our Lady of the Pillar be a forceful reminder that we walk in the footsteps of St. James and the early Christians of Hispania in following Christ. May she be for us a pillar of faith.

Our Lady of the Pillar, pray for us!