Authors:
Jean L. Courtès, SM
Translator:
Joseph Stefanelli, SM
This is an excellent read for those who like to see the challenges and complexities of establishing an implantation: in this case, the initial American Province of the Society of Mary.

This is an excellent read for those who like to see the challenges and complexities of establishing an implantation: in this case, the initial American Province of the Society of Mary. Father Jean L. Courtès spent a trouble-filled two years (1862-64) as provincial. To learn about his administration and the brothers under his leadership, read this compilation of letters.

I arrived in Cleveland the day before yesterday at six o’clock in the evening. We had left New York the previous afternoon at five o’clock. As we left the train station, His Excellency [Bishop Amadeus Rappe] was quickly surrounded by a group of Catholics who had come in procession, a band leading them, to meet him. He received a most warm and cordial welcome. They were like a group of devoted children, happy to be able at long last to see again a tenderly-loved father.

The procession set out once more. The band went first, followed by a lovely banner of the Blessed Virgin and the Temperance Society which numbers some 1,200 men. Not all were present. They were barely 300 on hand, as many could not come because of their work or because they had not been notified far enough in advance. They wore sashes of sky blue, some 6 inches wide, decorated in silver braid and having at the center a brilliant embroidered cross of gold thread. Half the men walked in front, in a double line and in perfect orderliness and recollection. There followed the carriage of His Excellency, decorated with flowers and garlands and followed by other major ecclesiastics of the city. With the bishop were the grand vicars and your humble servant, who was the object of inquisitive and friendly looks from the crowd, which had certainly not come because of me. The rest of the procession was composed of the remainder of the Temperance Society, in the same formation as those who preceded the bishop’s carriage. The women did not take part in the procession; they followed along on the right and left without any particular order. The streets in Cleveland are very wide, so it was possible for a large number of people to follow along and for the crowd to continue to grow without too much confusion.

In this manner His Excellency was accompanied to his modest home. Descending from the carriage, I tried to efface myself as promptly and absolutely as possible. The bishop addressed a few friendly and grateful words to the crowd. He dismissed them, reminding them to come to the cathedral at eight o’clock that evening for the Te Deum and the Papal Blessing and promised to speak to them of the pope and Rome. The crowd dispersed, expressing its feelings with enthusiastic and prolonged clapping of hands. At eight o’clock, the cathedral was packed.

So much for reception of the bishop. Now, what can I tell you of the reception of the Visitor by the brothers? Good Father, this was as cordial as had been anticipated. Our brothers seem to be absolutely well-disposed. I have not yet had a chance to see anything in detail. However, according to all appearances and all the reports which have come to me from outside, our brothers here are rendering a very good account of themselves, both as religious and as teachers. The two houses are modest but very well-maintained. It seems to me that a religious spirit and regularity reigned among them, and above all warm union and mutual understanding. In a sense, the two houses are really only one.

Yesterday I spent the entire day at the Cathedral school. Our brothers from across the river came over to join us. I intend to spend today with the community across the river; the Cathedral community will also go there. I speak to them of your paternal love for them all, of the warm feelings of the entire administration, and of the best wishes of all our brothers in Europe. Oh! How greatly they wish to be at one with you, to give you consolation by their practice of the religious virtues and by their exercise of zeal! There are excellent harbingers of good here. I am not at all surprised at the goodwill the brothers here enjoy. I have only one cause of regret—that the majority of them do not understand the language I speak, nor do I understand theirs. With a certain intuition, I can understand their desires, and I believe they grasp mine. But as to that mutual intimate conversation which served me so well for the good of all in the Midi Province, this is not possible here. It will be only through general and specific measures that I will be of any usefulness here. On this point I do not yet quite know what to do; I have not yet gathered enough information. I would like, if I can find a priest here—and I have not given up trying—to have him preach to them.

P.S. I am thinking of going to Dayton next week. I did not know we had brothers in Buffalo. We passed through that town, located between New York and Cleveland. Perhaps I will go there before going to Dayton. In fact, it is quite probably, but I have not yet decided. 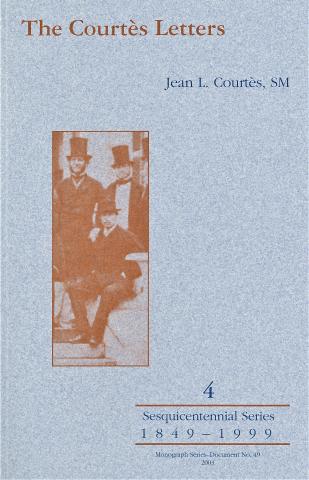