Authors:
Narcisse Roussel, SM
The "Confidential Memorandum" is a diatribe full of false assertions used to have Chaminade removed from authority so Roussel, its author, could position himself to assume leadership in the Society of Mary.

During his last years—when Father William Joseph Chaminade might have looked for respite from all the turbulent periods of his life with serene and unfettered days—he was subjected to a malicious attack.  His closest associates betrayed him. Narcisse Roussel, a member of the General Administration while Chaminade was Superior General, wrote the Confidential Memorandum. His purpose was to remove Chaminade from any influence in the Society of Mary and to position himself to assume the leadership. To those living in an age where fair and just treatment under the law is fiercely guarded, the story is even more disturbing because Father Chaminade never saw the document with damaging—and false—testimony against him.

In 1844, Roussel wrote the Memorandum to three archbishops to prove Chaminade was “not fit to govern a religious society.” Father Jean Chevaux, SM, the man who would become the third Superior General, called it a diatribe, full of false assertions and insinuations. When Chaminade tried to get a copy to build his defense, one of the recipients of the letter, the archbishop of Albi, told Chaminade the Memorandum was an “enchantment.”

To read this text is to gain entrance into the mind of Roussel,  a troubled and calculating man who unfortunately convinced the ecclesial powers of the time to declare the position of Superior General vacant which ended Father Chaminade’s leadership within the Society. It is not an easy text to read as it rambles and is repetitious, but it is a necessary text to understand the scheme that led to such a sad last chapter in Chaminade’s life.

The full story involves complicated legal matters over contracts and the rights of a founder; the episode is well documented in Vincent Vasey’s Last Years of Father Chaminade and Chaminade, Another Portrait. The fiasco did, indeed, delay the progress of Father Chaminade toward canonization. The truth of these events was brought to light through Father Vasey’s work in the late 1960s, and Father Chaminade was beatified in 2000.

. . . he [Chaminade] is looked upon as a wealthy man who has been skillful and enterprising enough to amass for himself from various sources a great deal of gold and silver; a sly and cunning man who strives for his objective using all available means, respectable or not; a two-faced man who always has the last word and who manages always to shy away from an obligation apparently contracted in good faith or to profit by another’s advantage.  We are not exaggerating at all…  (p. 11)

It seems that with the return of the verdict, a sudden and profound change took place in Father Chaminade’s personality, for as we will see, he is a different person and no longer himself.  Before, he saw everything in the Society through rose-colored glasses; afterward, he sees nothing but evil.  Before, understanding and sympathy reigned; afterward, he claims that this harmony never existed and that he intends to prove his point. (p. 20)

Appendix—Documents attached to the Confidential Memorandum and a letter from Narcisse Roussel. 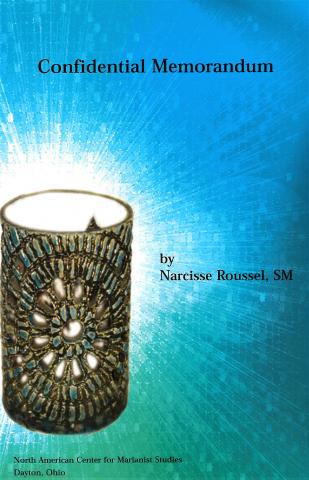