DUE TO THE SHELTER-IN-PLACE ORDER IN THE STATE OF OHIO, NACMS IS NOT CURRENTLY ACCEPTING BOOK ORDERS. CHECK BACK FOR UPDATES.

Suppression of Religious Orders in France

Authors:
Lucia Ubbiali, FMI
Translator:
Joseph Stefanelli, SM
This is a fascinating history of what happens when a government promulgates laws promoting anticlericalism.

This is a fascinating history of what happens when a government promulgates laws promoting anticlericalism.  Sister Lucia situates the struggles of the Institute of the Daughters of Mary Immaculate not only in the historical perspective of the French government’s repressive attitude towards religious institutes, she also deals with the consequences of these attitudes.  Relying on interviews and archival material, Sister Lucia objectively reports the failings and mistakes unavoidable when anyone is forced to grapple with laws and attitudes that threaten an institute’s very survival and, by extension, one’s own “survival” or way of life.  Another interesting part of this history describes the providential merger of the Third Order of Auch, a merger that assured the survival of the Daughters of Mary.

On July 7, 1904, the law was finally passed which excluded from the teaching profession any member of a congregation, precisely as such. All religious were thus affected, regardless of the juridical status of the order to which they belonged. Their institutions were to be closed within ten years; teaching congregations were to be dissolved and liquidated. The only exceptions were novitiates preparing personnel for French schools in foreign lands, in the colonies, and in French protectorates.

With the law of July, 1904, Combes finally succeeded in implementing the most Radical program of the enemies of the congregations. This was the most draconian and most exorbitant measure in common law ever taken against the freedom of education and against the fundamental principle of equal rights. It forbade “education of every level and every kind” to religious by simple reason of their membership in a congregation.

Between 1904 and 1911, 1,843 religious schools were closed, and 272 court cases were initiated for nonobservance of the law. Assets of the dissolved congregations could not be shared by the members; they became the property of the State and were confiscated. A disastrous liquidation degenerated into fraud. Sometimes the selling price dropped to one-fifth or even one-tenth of real value. By 1906, one-sixth of the assets had been sold. The cost of liquidation amounted to 32 million French francs, of which 17 million went to administrators and sellers. A disappointed Combes exclaimed, “They are dishonoring my work!”

The Response of the Daughters of Mary Immaculate

During the years of 1899 and 1900, the Daughters of Mary Immaculate had 258 members; of these, 138 were teaching sisters and 120 were lay sisters. There were 28 novices. This was a small number compared to the large religious orders, but enough for the state to include them in its fateful laws.

An important distinction has to be made between the “choir sisters” and the “lay sisters,” for it is precisely this difference which guaranteed the survival of the congregation. This is the thought of Mother Claire de Saint Joseph Abadie, a sister living at that time.

It was toward the end of the 19th century. A sectarian policy completely at the service of the antichrist directed all its forces toward the annihilation of the Church and the family of Christ, of him who had said, “Fear not, little flock. . . . I am with you until the consummation of the world.” In the midst of the most unjust and hateful laws, as before the boat on Lake Genesareth, he seemed to be sleeping. We could have said with the poet: “What can all the kings of the world do against him? In vain would they wear themselves out making war against him. He speaks; he has only to show himself, and they return to the dust from which they came.

Chapter 4. Means Adopted to Ensure the Survival of the Work of the Daughters of Mary Immaculate
Problems Resulting form the Uncertainty of the Situation
Trials and Failures of the New Foundations
Initiatives Permitting the Work To Continue 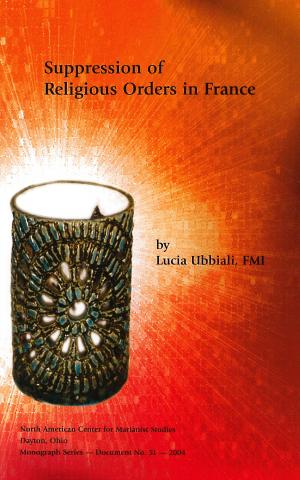